In Philipi, West Virginia, in the old converted train depot, you can see two mummies. No, not the fake Halloween kind. Not the flesh-eating living dead. Not even the Boris Karloff movie version. But real, honest to goodness mummies. And they’re kept in the bathroom. Well, it’s a converted bathroom, but it still has white tile and an echo.

When we planned our baseball trip of 2009, Ginny laid out our travel plans so that we could pass through Philippi just to see the mummies. Of course, she had found this information in Weird U.S., one of her favorite tour resources. As she says, “It’s fun to see the strange stuff.” It doesn’t hurt that Dan is a toy train collector and loves to stop at old train depots. That’s how she enticed him to the place.

We entered the town across a picturesque covered bridge and immediately off to the left was the lovely remodeled train depot. The inside has been totally refurbished, in part due to the Great Flood of 1985. 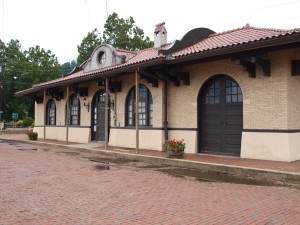 The remodeled train depot at Philippi, WV, home to the mummies.

We entered with some trepidation. Who knew what we’d find? Inside was a clean and bright space with light oak floors and matching glass cases and wood shelves with well-organized displays about the Civil War, local history and state interests. We were greeted immediately by a friendly, short, white-haired woman who looked to be in her 70s. She asked where we were from and when we answered Rochester, New York, the inevitable question was how we had come to be so far south. Dan had to explain our baseball trips and Ginny explained that we were interested in the area. She didn’t want us to look so crass as to travel here just for the mummies—although we had done so. After strolling around the small space, we found the door, which in a former life had actually been the men’s room, but was now the mummies’ room. The sign on the door read that the charge was $1, so Dan paid the docent and we entered.

We have both been to many museums, the Smithsonian included, but we had never been in a bathroom that accommodated mummies. What was not white tile was painted white, with a window just below the ceiling, but not low enough to see in unless on a ladder. On the left, on a raised platform (probably where the sinks used to be), placed inside a wooden crate were six five-gallon glass jugs with what looked like aluminum wrap over the spouts. And just in front of us lying in their separate open pine boxes were the mummies. The coffins were sitting on a type of dais and pulled up along side was a step stool so anyone could get a bird’s eye view looking down into the boxes.

Brown, wrinkly figures lay swathed in white sheeting that was draped strategically across parts of the torso—those places that, had they been alive, would have cause for an X-rating. White silk and plastic flowers were laid across the chest areas. They were what one might expect of mummies: skin shrunken around bones and browned, like a smoked turkey. 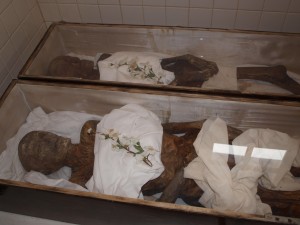 On our baseball trip of 2009, we met the mummies of Philippi, WV.

While Ginny tried to maneuver around the small area to see the best angle from which to get a picture, Dan took a quick close look then backed away. So Ginny climbed the step ladder and took a few shots trying to not get a glare of light off the glass laid over the mummies’ coffins. It was a new camera and she was still learning all the new-fangled capabilities and settings. Then she noticed Dan standing in the far corner—that is, as far as could be in a former men’s bathroom. He said, “Can we go?”

She said, “Just a couple more.”

Finally, she took one last look at the couple and said, “Pretty cool.” He said, “Can we go—now?”

When we came out of the mummies’ room, there were no other patrons in the museum. So Dan bombarded the docent with questions. And she was happy to share her knowledge with us. She explained that the person who had performed the mummification had been a local farmer in the late 1800s, Graham Hamrick. The docent, Susie Lambert, stated that Hamrick was interested in a safer method of embalming than what was used at the time, arsenic and mercury. He experimented with what he said was a technique using salt peter and sulfur, which he had read about in the bible. Lambert went on to say that Hamrick started his experiments with milk, then vegetables and moved on to small animals.

Lambert explained that once he was ready to move on to humans, Hamrick, with the help of a local judge, he was permitted to experiment on two females and a baby who had died at a local insane asylum. Sadly, their bodies lay unclaimed by family and friends.

In 1892, when the US government outlawed the use of mercury and arsenic for embalming, Hamrick received a patent for his method and formed the Hamrick Embalming and Mummifying Fluid Co. When he died in 1899, Hamrick’s son took the mummies on the road with the P.T. Barnum circus, after which he kept them in his barn. Many years later, they came into the possession of the Philippi museum (Lambert). Lambert said that during the Great Flood of 1985, the mummies were under water for four days. This destroyed the remains of the infant mummy and claimed the hair of the other two. But that was the only damage. Since that time, the mummies have spent their time in the renovated men’s room of the renovated train depot, but are cared for with respect.

In a television interview in 2011, Lambert spoke fondly of the museum’s “little ladies.” She stated simply, “We give them a home which is more than they had in life” (“Traveling West Virginia,” Eyewitness News, Oct. 20).