Dan is a great fan of bluegrass music. Ginny has a respect for it—on a limited basis. So in 2009 we made our Baseball and Bluegrass Tour to West Virginia and southwest Virginia (with some Pennsylvania and Tennessee thrown in on the side). We saw six new ball parks, saw many historical and famous geographic sites, and attended two live bluegrass venues—where they danced and sang and played and danced some more, or I should say clogged.

For those of you not familiar with this particular Appalachian form of dancing, you’re missing a treat. This form of dancing uses loose metal taps on the heel and toe of a leather shoe (usually cowboy boots), so that when the dancer’s foot hits the floor, the metal pieces clink together like castanets. The sound becomes an integral part of the music, tapping rhythms in time to the dance. The clogging we witnessed was done by individuals, not couples as other dancing would be. However, there are team competitions across the country (with a grand championship at Opryland in Nashville). According to “A Brief History of Clog Dancing” by Jeff Driggs, modern clogging descended from the Irish and Scotts, as well as from square dancing, and was influenced by Cherokee, African and Russian step dances. Clogging in turn has influenced street dancing and hip-hop. 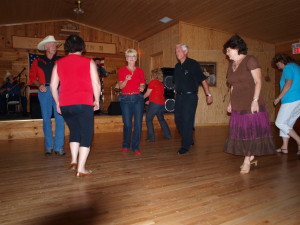 One of the bluegrass venues we attended was at Lay’s Hardware Center for the Arts in Coeburn, VA. The place was a former hardware store in the middle of the downtown area. Although it had been converted into a small concert venue in the middle, there was still much evidence of the old store left behind. All along the walls were drawers and shelves, including a general-store-like counter. In the center of the “store” were rows of chairs taken from some old movie theater. In the back of the “store” was the stage and in between that and the chairs lay the dance floor.

Lays Hardware in Coeburn, VA, one of our bluegrass venues.

We arrived an hour early for the performance, but we weren’t the first in line. A couple of local people sat outside smoking and waiting for the place to open. They eyed us somewhat suspiciously since we were conspicuously not locals. When the doors opened, the ticket sellers were quite curious about our state of origin, since we definitely did not sound local, either. They were delighted when we announced New York and, as always, wondered why we had come so far. Dan explained our obsession with minor league baseball and his personal interest in bluegrass. They welcomed us heartily. But that wasn’t all….After the band had taken the stage (we had snagged front row seats), but before they began to play, the M.C. for the evening announced that they always liked to acknowledge new visitors and that people who travel long distances were special guests. He asked us to come up to the stage, which we reluctantly did, and he presented us with a signed and numbered print by a local artist. The picture was of the Lays Hardware sign surrounded by several of the most prominent bluegrass artists who had performed there. We were speechless. And for both of us—that’s a miracle.

After the presentation, the players finally got down to playing and the dancers got down to dancing. It was fascinating! We watched, enthralled by the music and the rhythms of the feet as people tapped their way past us, again and again. First, the band played several faster numbers where clogging was the dance. Then they played slower songs, where couples actually danced together a type of two-step that neither of us had seen before (despite seven years of ballroom dancing lessons). Ginny watched intently for the patterns: two steps forward, one step back, two steps forward, one step back. Some dancers were better than others, but even the children were trying out their skills on the floor.

One particular man caught our attention. He was sitting in the front row of seats that completed an L with our front row. He sat at the far end with a woman we supposed was his wife. He was short, probably about five foot six or seven, wore a cowboy hat of straw and brown cowboy boots. His red shirt was ornamented with a brown vest. He looked ready to take on the town. When the first song started, he popped up from his seat and clogged his way around the floor. He danced every dance and was always the first one on the floor. Then a strange thing happened. Seated behind the man and his wife was a little grizzled old man, who, we found out later, was the oldest person there, being in his 90s. The dancing man wanted to get the old man onto the floor—apparently his clogging skills were something of a legend in the area. However, the old man didn’t have any clogging shoes. The dancing man sat down, took off his boots and handed them to the old man. In no time flat, the old man was on the dance floor, clogging as if he were 25 (well, at least 55). It was amazing to watch. But no shoes didn’t stop the dancing man—he was up whenever there was a slower song where he didn’t need to pound his feet into the floor.

After intermission, during which several people approached us to ask about our travels, the music started up again and the dancers clogged their way around the space. Then came a slow song and here came the man with no shoes. He walked right up to Ginny and asked her to dance. Flustered, she stuttered out that she didn’t know the dance. Yet, Dan prodded her out of her seat, saying, “Oh, you can do it. Go ahead. Go ahead.” She gave him a dirty look, then smiled at the stranger and said, “Okay.” And it was okay; she caught on very quickly and only stepped on the poor man’s toes once. While they danced, the man said his name was Jim and that he’d been dancing his entire life. Ginny asked him about the clogging tradition and he bemoaned the fact that not many young people were interested any more in the centuries old dance. He was afraid that their type of dancing would die out with his generation. After the song ended, Ginny thanked Jim and retook her seat.

With the end of the concert, we said our goodbyes to the organizers, saying how much we enjoyed the music, and waved to shoeless Jim and his wife. The people here had been more than just friendly; they had been the epitome of Southern hospitality. Just another great example of how to enjoy our nation, with a side of baseball.