As you could tell by the last two editions of our Minor Road Trip blog, we like to talk not only about minor league baseball, travel and historical sites, we also like to talk about food, baseball park food and what is sometimes referred to as “road food.” Road food is served in those little family-owned restaurants, diners and drive-ins that we run across on our baseball travels—those small town coffee shops and places a person would never haunt unless they were a local or someone traveling the back roads of America going from one minor league baseball park to another. We have one here in our hometown that is on the top of our got-to-eat-there list.

We have a good number of friends who enjoy baseball, but only a few who enjoy it as much as we do. As has been mentioned before, we really don’t have a favorite team. Yes, we both grew up in the Cincinnati area so we always keep an eye on the Reds, but for the most part we have given up on major league baseball—too much money and too many prima donnas. We love the intimacy of the minor leagues. Most of our friends enjoy minor league ball because it is near by and accessible, but they all have a love for one particular major league team. Dan has a friend who has even gone to the point of having the Boston Red Sox logo tattooed on his arm. We both have a close friend who loves baseball as much as we do, but he’s one of those who loves his major league team and enjoys minor league baseball because it is available. His name is James Brown. The issue that we have with him is that his major league team is the New York Yankees. James lives and breaths the Yankees. We, on the other hand, always have to explain to James that the Yankees are the epitome of what we dislike about major league baseball. And we always add that our favorite MLB team is the one that has most recently beaten the Yankees.

James owns and operates a diner in our hometown of Rochester, New York, called simply enough “James Brown’s Place.” It is an absolutely delightful little store front American diner that he has been running since 1998. Dan started going there for lunch sometime in early 2000 when he was the interim rector of the Episcopal Church about two blocks away – he would go there with the lay leadership of the church for meetings. He took Ginny there for lunch shortly afterwards and we have been going back ever since. To put it mildly, it is our favorite restaurant in all of Rochester. The diner is a breakfast and lunch place with a Friday night fish fry. As a matter of fact, we were there this past Friday for the fish fry – well, Ginny had the fish fry. Dan had James’ BBQ ribs. (He does an outstanding job of smoking his own meats.) It’s certainly not a fancy place by any means. Instead, it’s one of those places when you walk in for the first time, you may think to yourself, “what have I gotten myself into.” However, the staff is extremely friendly and the food is wonderful. We are not the only ones in town who think this. James does a good business, but on Saturdays and Sundays the place is generally packed. There may be a wait at the door, but it’s worth it.

James himself is just one of those guys you have to like. He’s a big bear of a man with an absolute heart of gold (as cliché as that sounds) with an ability to keep people coming back. He makes them feel at home (in a restaurant) with his winks or hugs, his self-deprecating sense of humor (the motto of the restaurant is “James Brown’s Place: A legend in his own mind”) and his welcomes to all new and not so new patrons. One wall of the diner is filled with pictures of James and friends, but the most important section is his shrine to the Yankees (a picture of each of the Yankees’ World Series winning teams plus other Yankee fan memorabilia). It should be noted that Dan prefers not facing the “shrine” when he eats. He would prefer to look at a picture of the backside of a naked man grocery shopping (they say it is a picture of James) than have to gaze at the Yankee shrine. (James and Dan have a continual discussion about whether or not the Yankees, according to James, are “God’s Team.” Dan always quips that if they were God’s Team they wouldn’t have to have a $ 230 million payroll and not be doing so poorly—they would play just for the love of the game and be winning.)

One characteristic about James is that he always wears a baseball cap with the logo of some baseball team. He doesn’t get to wear them for long because he cooks in them, so he goes through them fairly quickly. One of our great joys, especially for Dan, is picking up at least one ball cap a trip from one of the teams we visit in a year for James. He loves getting the hats and Dan likes giving them to him. It’s something Dan’s grandmother taught him: if there is something simple you can do to bring joy into someone’s life, do it. So Dan’s goal in life is to find hats for James every trip. 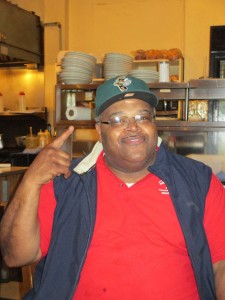 Although James is always grateful for his hats, he does have a couple of rules—no Boston Red Sox or New York Mets affiliates. Occasionally, we do plot evil things and our we-are-not-Yankee-fans side comes out. Then our goal (especially Dan) is to get James into a Red Sox or Mets affiliate cap, and we did it with this last trip to Savannah. We picked up a Sandgnats fitted (7 & 5/8ths) home team hat for James, got him to put it on, took a picture and then informed him that they were a Mets affiliate. He liked the hat so much, he changed his rules a little: as long as it wasn’t Boston, well, even Boston is okay this week.

So if you are hitting the Rochester RedWings (AAA—Minnesota Twins) in between seeing the Auburn Doubledays (Short Season A—Washington Nationals) and the Batavia Muckdogs (Short Season A—Miami Marlins), stop in and see James Brown’s Place (www.jamesbrownsplace.net). It is the ideal baseball road food place—and you got to meet James. A legend in his own mind!